On the banks of Vltava River stands one of the modern architectural masterpieces of the city of Prague. The Dancing House has an undulating façade with full view of the Prague castle and Charles Bridge. The site lay empty for close to half a century after Americans in the Second World War accidentally bombed the building that preceded it. Admirers of Gehry’s architecture see his efforts as peaceful reparation for the wrongs committed. On the hand, lovers of original Prague architecture see it as the second American invasion of their city. Nevertheless, the Dancing House exhibits everything about the evolving Prague society (Pesch,14). 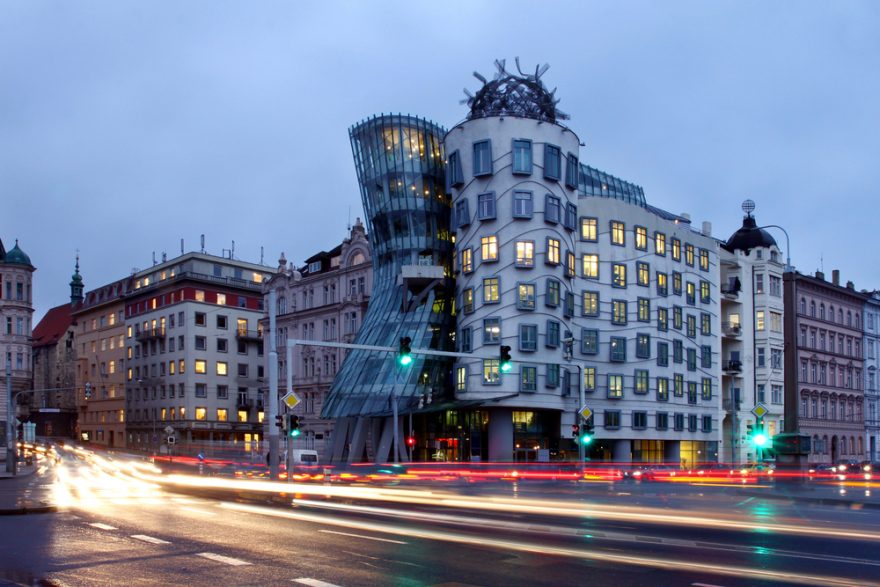 During the communist era, architecture was restricted to large state firms largely designing industrial buildings to house as many people as possible. The emphasis was on ease of construction, efficiency mass production. Aesthetics and individuality were not highly regarded in communist architecture. With the fall of communism, the desire for personal expression took root. The city’s young population is needed a departure from the past.

The building stands in stark contrast with its historical setting. The adjacent buildings have strong Baroque, Art Nouveau and Gothic themes typical of Prague City. For an untrained eye, the postmodern Dancing House architecture does not blend well with the older architectural styles. However, the project had the blessing of Vaclav Havel, the former president of the country who rose from dissidence to lead the country. Havel’s avid support of the project convinced a skeptical public of the need for a deconstructivist architectural form next to the old and cherished European masterpieces. Havel’s idea was to build a cultural centre on the bank of Vltava River.

From one side, the building looks like a two people dancing. Yet, a careful look gives the impression of a collapsing building having already caved in the middle. This alludes to the destruction of the city during the Second World War. At the top of the building is a metal dome resembling the Hiroshima bomb memorial structure. 99 concrete panels support the building, each with a different shape and dimension. The panels are curved uniquely in three dimensions taking up a substantial space of the floor area. There is also large twisted structure on top of the building nicknamed Medusa. The interior has two curved pillars that support a tower of glass half the height of the building.

The architects ensured that the building blended well with its location. The windows were the same level as adjacent buildings. In addition, it had a wavy glass molding along the edge resembling the wavelike motion of water in the nearby river. However, the winding moldings on the facade do not blend well with the other buildings and creates a confusing perspective. Most notably, the building avoids use of right angles thus sharply contrasting with the surrounding. It creates a disruptive change from the old and trusted European architecture. In a sense, this disruption is akin to the American destruction of the predecessor building during the Second World War (Pesch, 15).

Deconstructivist architecture saw a marked departure from the norm. Dancing, in the Puritan tradition was a sinful act. Thus, a Dancing House in such a historically significant city is a true departure from the accepted. The deconstructivist architecture employed in the building signals the quest for change, tolerance for risk and ambiguity and distortion. It was an embrace of diversity in a sea of homogeneity. Deconstructive architectures arose out of the rubble of World War 2. The destruction brought about fragmentation in architecture that resulted in empty facades, steel sculptures and sky windows. This allowed building such as the Dancing House to get free natural lighting. This reduces energy use and maximizes visual comfort (Pesch, 15)…

What do you imagine when you ponder over a critical thinking paper? Do you need to be as smart and unbelievably attentive as Sherlock Holmes to write such a paper, or being an ordinary human would suffice? Actually, critical thinking paper requires a lot of time and mental effort (though not something as complicated as Sherlock does), now you have the ultimate helper—us! Maybe that sounds a little bit arrogant, but first you should scroll through our blog and find out how many useful free information we have collected for you. And, besides, we are always ready to create a great paper—all you need is to buy a college paper from us.